Disclaimer: We are not offering advice here in relation to any kind of treatment for any kind of medical condition. We are simply sharing information we have found out for ourselves about some potential health benefits that are believed to be associated with consuming cruciferous vegetables, in this case broccoli sprouts. The following information is not to be construed in any way as either medical or nutritional advice from us.

Having said all that, if anything is deserving of the somewhat hackneyed term ‘superfood’, it looks like broccoli sprouts should almost certainly be in the shortlist. They have a significant list of positive attributes, based on what studies have uncovered so far.

The health benefits of broccoli sprouts revolve around a particular type of isothiocyanate known as Sulforaphane. Sulforaphane is not actually present in cruciferous vegetables but it is produced as a byproduct when the plant material is damaged, bruised, chewed, blended or juiced! Any of these actions will start a reaction in the damaged plant material where the enzyme Myrosinase acts upon the precursor Glucoraphanin to produce Sulforaphane. There’s a bit more nerdy stuff about that reaction later on but it’s the Sulforaphane we’re interested in. 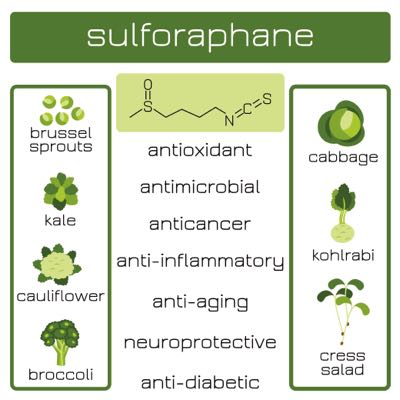 Although we can’t reach totally solid conclusions from the mostly non-human research that’s been done so far, there’s a growing body of evidence and people who know far more than we do have made some seemingly sound inferences. This leads us to think we should all probably be knocking back healthy amounts of broccoli sprouts.

Perhaps one of the most striking components for us is the anti-inflammatory effect, because inflammation in general is implicated in so many conditions that reduce quality of life, both physically and mentally. But people are turning to Sulforaphane for it’s promising profile in relation to all of the problems listed above, as well as using it as a general health supplement. We could go into much greater depth than this but we’ll leave that to the experts. If you want to learn more we highly recommend checking out Dr Rhonda Patrick on YouTube – she’s great and she practices what she preaches. Just search for broccoli on her youtube channel.

While its true that the precursor to Sulforaphane, Glucoraphanin is present in all kinds of cruciferous vegetables from cabbage to kohlrabi, young sprouted broccoli seeds contain up to 100 times more of it weight for weight compared to mature broccoli florets. Juicing broccoli sprouts or whizzing them up in a green smoothie is a great way to get your daily dose of this seemingly magical isothiocyanate and growing your own broccoli sprouts is both cheap and easy. Simply soak organic broccoli seeds in water for 6-8 hours, put them in a sprouter of your choice and keep them regularly misted until they are about 5 or 6 days old before using them in your chosen recipe. You can simply eat them in salads or very lightly sautéed in stir fries, blend them into your green smoothies or juice them in any masticating juicer. If you want to get going straight away, we’ve put together a few Broccoli Sprouting Kits here, or if you are already into sprouting and have your own sprouter we have bulk packs of the finest Organic Broccoli Seeds here. 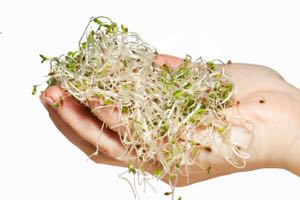 More nerdy facts. The enzyme responsible for transforming Glucoraphanin is also more stable in young sprouts than it is in mature broccoli, which gives rise to a great tip from Dr Patrick. The enzymatic reaction can go two ways and produces both Sulforaphane and Sulforaphane Nitriles. We want the first but not the second, because the nitriles don’t seem to have the same benefits. The formation of nitriles needs a certain protein which is deactivated by heat. Now we know it’s counterintuitive for raw fooders to think about heating food to 70º celsius but this is solid science. Ten minutes at that temperature, say sat in hot water or a sous vide bath, will ensure maximum bioavailability of Sulforaphane in your broccoli sprouts before you blitz them or eat them, because the enzyme still works and the unwanted protein doesn’t. Bingo.

So are there any downsides? Well kind of, but not insurmountable. Unfortunately the good stuff is also the characteristically pungent stuff that comes from cruciferous veggies, and broccoli sprouts are no exception. So when they are growing they do kind of smell like somebody has let one go when you get up close. It’s a small price to pay for all those potential benefits. We just blame the dog.

Disclaimer: We are not offering advice here in relation to any kind of...

It’s Mother’s Day and the perfect opportunity to show how...