What is a Slow Juicer?

Simply put, this term could really be used for any slow speed juicer but in recent years it has come to mean a specific type of vertical masticating juicer that has taken over as the most popular format in our range. Virtually all masticating juicers could technically also be called slow juicers. Masticating means chewing and all masticating juicers work by chewing and grinding the fibres of your juicing ingredients together and then putting pressure on the juice and pulp mixture to extract the juice through some sort of filter. In this sense you could say that all our masticating juicers are also what people sometimes refer to as ‘cold press juicers’, because they press or squeeze out the juice at low temperature, preserving the nutrients that might otherwise be damaged by heat.

However, due to the popularisation of the vertical slow juicer format, nowadays when people refer to slow juicers, or cold pressed juicers, they are more than likely thinking about the now ubiquitous vertical slow juicer format, even though there are other types that also have a slow, cold pressing action. As is often the case, if a brand starts promoting ‘cold press juicing action’ as a selling point, that term will become associated with a particular type of product. View our full range of slow juicers here.

When we started out in 2002, what we now know as vertical slow juicers didn’t even exist, but low speed juicers were already widely available in the form of Single Auger Masticating Juicers and Twin Gear Juicers. To add to the confusion, single auger juicers are also sometimes called single ‘gear’ juicers. But the old style of single auger juicers are not the only type that have an auger nowadays because all the new vertical format slow juicers also use the same juicing process. Confused yet?

First lets get Twin Gear Juicers dealt with. These are in a class of their own and not easily confused. They also offer the best quality juice that can be had from a single operation in your own kitchen. They achieve this by passing the juicing ingredients between two cylindrical stainless steel gears with a tiny gap, which means they break the fibres down very thoroughly to release more nutrients. They are slightly less convenient to use because they are a bit fiddly to clean and require more care when in operation. For these reasons they are popular with those who are real juicing enthusiasts and just want the very best quality juice, or with people who are juicing as some kind of nutritional therapy. 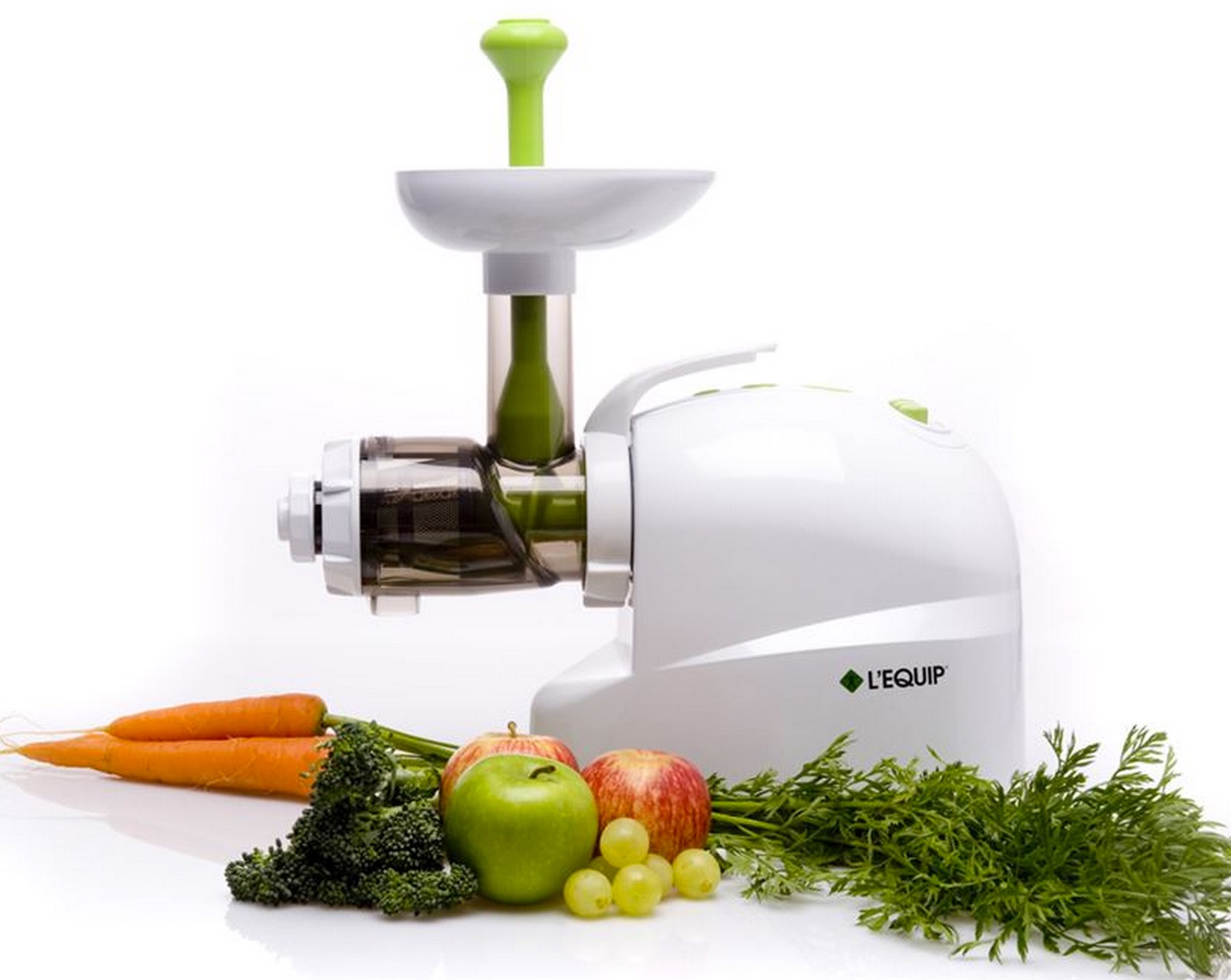 The original use of the term ‘single auger juicer’ was coined in relation to models that use a slow rotating auger or screw to mince, grind and press juicing ingredients inside a conical filter. Until a few years ago all auger juicers were horizontal in orientation. Good examples of this horizontal format would be the Vidia SJ-002 or the Omega 8006. These juicers offer performance that is almost as good as a twin gear juicer but with increased convenience and a much more affordable price tag. This type is also the most popular for wheatgrass juicing. However, they are also a little slower in use because the design limitations only allow for a fairly small juice filter, so a little patience can be necessary with some ingredients.

Can A Slow Juicer Ever Be Fast?

For some people, whether or not juicing will become a daily investment in health can be determined by how quick and painless the process is. With single auger juicers, a low rotational speed is a necessity to prevent heat and friction building up, so the primary way to decrease the overall time spent juicing would be to increase the amount of ingredients juiced with every turn of the auger or screw. To do that, you need a bigger surface area where the juicing is happening – a bigger auger and a bigger juice filter. This is what the new vertical format achieves. 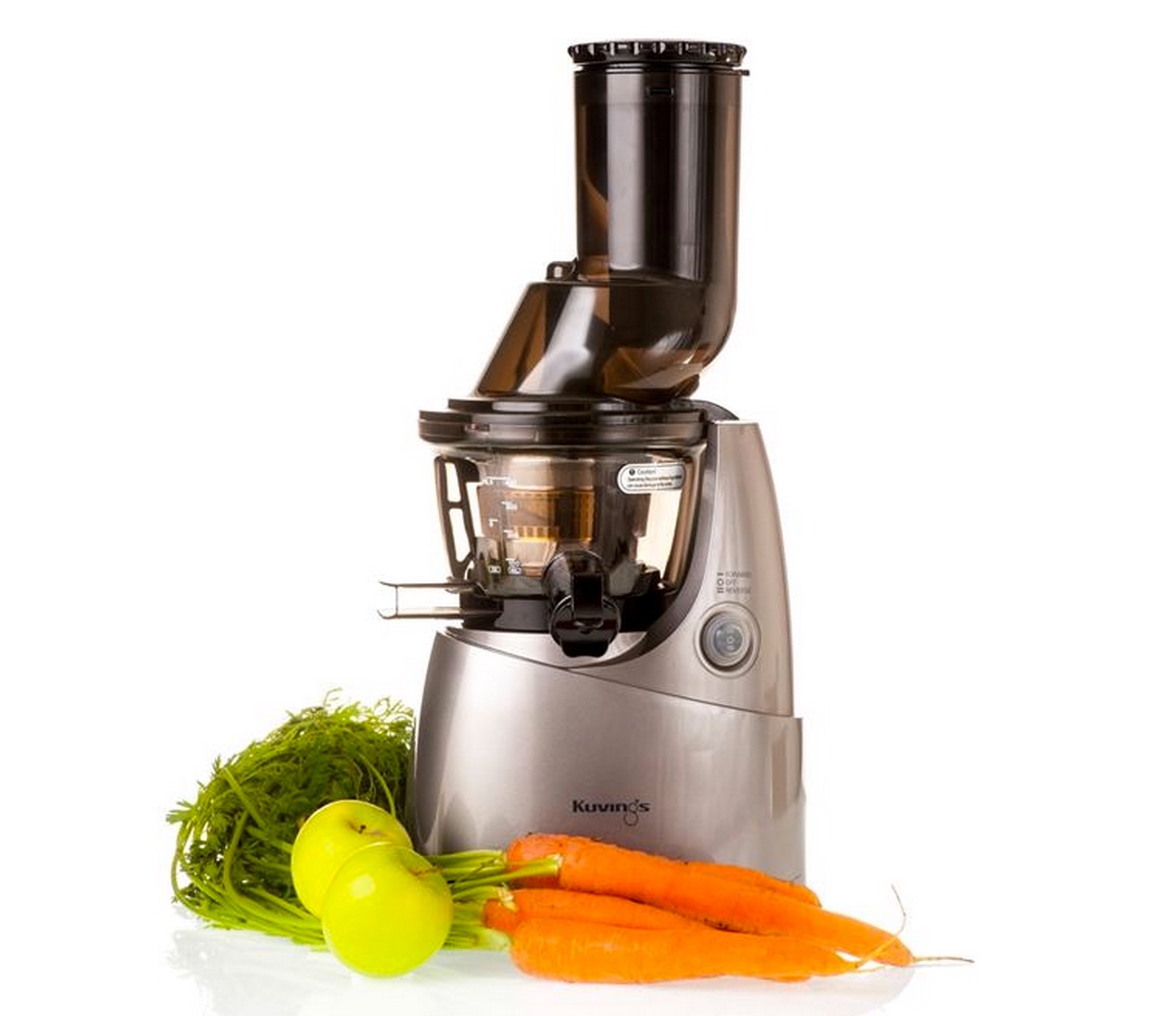 With the horizontal format, the feed pressure is at ninety degrees to the motor shaft and this imposes some design limitations on the size and weight of the juicing parts. If you could have the forces in line with the motor shaft, you could have a bigger auger and screen and that is exactly what has been done by creating the vertical format, which we now tend to know as a slow juicer, or a ‘vertical’ slow juicer because of its vertical orientation. With every turn of the motor in this newer type, more ingredients are processed by the bigger auger taking a bigger bite of ingredients. They are quicker, with fewer back ups, but with no compromise on juice quality compared to the horizontal models. This juicer format has recently brought the benefits of cold pressed juice to a massive audience and that popularity rests almost exclusively on the fact that they are so easy to live with.

Slow juicers are almost as quick and easy to use as a conventional centrifugal juicer, but they are also able to efficiently process a much wider range of juicing ingredients including soft fruits, leafy greens and wheatgrass – ingredients that centrifugal juicers can’t effectively cope with. In the modern kitchen, we can safely say that if you want the higher nutritional benefits of a masticating juicer, vertical slow juicers are by far the most convenient choice.

One word of caution may be advisable here. Since slow juicers were designed, developed and popularised by a few high quality brands like Omega and Kuvings, the market has now been saturated with cheaper Chinese copies of these original designs. The sheer number of names given to these cheap alternatives is becoming bewildering and if our experience is anything to go by, many of them will disappear just as quickly as they have sprung up. UK Juicers™ recommends and offers reputable slow juicer brands which we have tried and tested ourselves. These are brands that promise to be around long after many of the imitators will have disappeared and we are confident that the higher price tag of our offering is justified by the quality, performance and reliability – as well as by the peace of mind that the products will be available and supported by their brands in the long term. If you have any questions about slow juicers please don’t hesitate to call us on the number at the top of the page.

Are Nama Juicers Worth The Money?

It’s fair to say that a juicer is probably one of the more expensive...

It’s no surprise that the popularity of juicing has soared in recent...

What is the Best Juicer?

So which is the best juicer? There is one simple answer: it’s the...