BPA – What’s All The Fuss About Bisphenols?

BPA is an abbreviation of the chemical name of the substance Bisphenol A. It is used as an ingredient in the manufacture of some plastics, primarily Epoxy Resins and Polycarbonate. It is also used in the plastic linings of many drinks and food cans.

BPA is also used in a wide range of other plastic products that come into contact with our food and in the case of customers who are choosing a juicer or blender we are sometimes asked if their selected product contains BPA. With the UK Juicers product range this primarily applies to those which use polycarbonate parts. Sometimes polycarbonate is used in juicing assemblies such as juicer hoppers, lids, juicing drums & juice containers supplied with the juicer. Polycarbonate is also the material of choice for most commercial grade blender jugs because of its ‘shatterproof’ quality – in other words if you drop a polycarbonate jar it will bounce and not break.

Most manufacturers are now addressing consumer concerns about BPA by moving towards the use of BPA free polycarbonate. We are trying to keep our website updated to show where products are BPA free but at the time of writing the information keeps coming in, so if in doubt please contact us and we will let you know if the product you are looking at is BPA free. In cases where the product doesn’t use polycarbonate but does use other food grade plastics (for example the juicing parts on The Champion and Kempo Juicers) you can usually assume that the product doesn’t contain BPA.

Why are some consumers concerned about BPA?

BPA is a widely tested chemical and as people become more and more concerned about the effects of chemicals in the environment it has come under close scrutiny by the scientific community as a potential health concern. In 2010 it was declared toxic and its use in the manufacture of baby bottles was banned. This brought it into the wider pubic consciousness for the first time and as serious concerns had been triggered by this, manufacturers of other food related products began looking for ways to manufacture polycarbonate without BPA.

As we might expect, the media dealt with the issue in it’s usual way, using hyperbole and creating alarm about this latest toxin that we must avoid at all costs. Unless we are prepared to look a little further into the scientific evidence of harm, we could all be forgiven for thinking that this is a chemical killer lurking in our home appliances and kitchen containers and that we must get rid of everything plastic to survive. In reality the risks are a small part of the total risk from exposure to manmade chemicals, but in a world where personal choice is increasingly important it’s understandable that people would wish to reduce their exposure to these toxins as much as possible.

What are the risks? 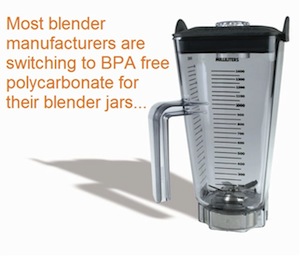 Polycarbonate is a very stable plastic. Its resistance to leaching by exposure to heat or chemicals is very high and this is one of the primary reasons it is suitable for food related use, along with its strength properties. One might consider the level of exposure to other toxins in the environment to put the risk from BPA into perspective. It’s also important to remember that the scientific evidence of toxicity has been largely demonstrated on the basis of studies on laboratory animals using direct exposure to BPA. This doesn’t often happen with humans in such high concentrations (unless they work with the chemical) and manufacturers of BPA argue that the research in no way simulates its use in consumer products and that it doesn’t offer evidence that the exposure we undergo from plastic products in normal life presents a significant health risk. They may have a point, but perhaps only because the risk from BPA is present in so many other ways than just blender jugs and juicer parts!

Unlike other toxins which may persist for years in the human physiology, BPA is believed to be non-bioaccumulative in adults, or in other words, we can get rid of it. However, because exposure in the environment in general is high, BPA is often continuously present in human tissues. Other sources of contact with BPA in the daily life are possibly of equal or greater concern than contact with polycarbonate as used in blenders and juicers. For example, the plastic linings of food and drinks can where these coatings are subject to either very high temperatures (with foods that are manufactured by cooking in the can) or chemical attrition (acidic soft drinks, for example) are one significant source of BPA. It is also constantly present in our environment, from release at the point of manufacture by chemical companies and from losses by leaching from landfill sites into the water table. It is even used in dental sealants. Unfortunately it is also constantly present in the air we breathe, along with many other chemical toxins produced by the activity of humankind.

It is of course completely understandable why we should take a ‘better safe than sorry’ approach by banning its use in baby bottles as we would all want to protect our children from as many chemical risks as possible, however small they may be. As baby bottles are subject to higher temperatures than most other food plastics, often several times a day, there is an increased risk that BPA might be leached from the plastic, so if alternatives can be made available then it is right that they are used. These fears in relation to the development of babies in the womb and the development of growing children are more of a concern than the risks to adults, as BPA has greater consequences when human tissue is growing and developing. It is worth considering though that certainly in a juicer, and most of the time with a blender when making smoothies, the possibility for BPA leaching from plastic into the food is limited in two ways. Firstly the length of time of exposure to the plastic is short when making a juice or smoothie. Juice simply passes through the juicer parts, in most cases making contact for a matter of seconds. Secondly the ingredients are usually cool, so there is no heat to speed up the leaching out of BPA or other chemicals. The risks from containers that are heated (baby bottles) or used to store liquids (cans, plastic juice bottles, etc) are significantly higher because of the duration and temperature of contact.

It’s worth remembering that BPA is only one of the myriad chemicals added to plastics and eliminating it doesn’t necessarily eliminate ALL potential harms from plastics which use a substitute. There are other bisphenols that may be equally harmful and which may be present in BPA free plastics. Recent research suggests that BPA’s common replacement, BPS may potentially be just as harmful to health. What other harms may be lurking in plastics? Regardless of what is supposed to be included in the manufacture of food safe plastics, the industry is so poorly regulated that very little toxicity testing actually takes place. If we really start to dig into what is going on we find quite a worrying picture of an unregulated industry with huge lobbying and legal resources. We might be forgiven for concluding it is actually impossible to avoid these man made toxins simply by paying a premium for so-called ‘safe’ plastics, which might eventually themselves prove to be equally as unsafe as research progresses.

Scientists don’t have a vested interest in misleading us with their work so it’s quite right to take account of their findings. Production of BPA is a £6 billion industry and in 2009 more than 2.2 million tons of the stuff was produced. It seems there is no realistic way of avoiding it completely in the world we have created, but thats not to say we shouldn’t look for alternatives now and move away from using these toxins. According to an expert panel consensus produced by 38 scientists:

“BPA is within the range that is predicted to be biologically active in over 95% of people sampled. The wide range of adverse effects of low doses of BPA in laboratory animals exposed both during development and in adulthood is a great cause for concern with regard to the potential for similar adverse effects in humans”

Scary stuff. If you want to read what the expert panel found in full you can do so here:

Everyone has to decide for themselves how they avoid exposure to harmful manmade chemicals in daily life and if we consider the risks from everything out there, it seems nigh on impossible to avoid many of them effectively. If you are going to avoid buying a blender a juicer or food processor because it may contain BPA, are you also going to be able to avoid the other more significant sources in your world that expose you to to this toxin? What about the other harmful chemicals that we ingest with the foods we eat, the water we drink and the air that we breathe? How do you achieve a balanced perspective on the risks involved? This is not easy because every year there are further breakthroughs in the understanding of human physiology and how these toxins effect us. It’s another personal choice deciding how much weight you give to a product being BPA free when you are choosing a juicer, blender or food processor from our range. Evidence suggests that if you live a fairly normal life, you are at best making only an incremental improvement to your exposure to BPA by choosing a BPA free kitchen appliance, because there will still be other sources of exposure in day to day life.

Being BPA free is certainly a plus, but should it be the overriding factor when choosing a juicer? When juicing, the exposure of the juice to plastic is temporary and minimal in most juicers. It usually happens at cool temperatures so the risks are low. Blending hot liquids would be more of a concern, especially if it increases exposure to BPA for developing children. But at best this is a precautionary approach because nobody as yet has produced evidence that shows the proportion of exposure that comes from all the other different sources of bisphenols out there in the environment. Like many other toxins, it seems avoiding BPA completely is close to impossible and by adopting a lifestyle that includes juicing and other healthy regimes, at least you are giving your body the ammunition it needs to fight off all the nasties that we come into contact with in the environment. Juicing is one important way to stay healthy and improve your body’s ability to detoxify itself.

Spiralizing is the art of using a spiralizer to turn vegetables and...

Which Is The Best Spiralizer?

Our Buyers Guide – Choosing The Best Spiralizer For Your Needs...

Advice on Selecting the Correct Bellicon Weight Rating All Bellicon...