Is it always best to have a whole apple size feed chute on your slow juicer?

Original Equipment Manufacturer NUC in South Korea were the first people to put big feed chutes on a vertical slow juicer, and they first appeared over here under the Kuvings brand. Korea has been responsible for many of the major steps forwards in juicer technology over the years but unfortunately almost as soon as the Kuvings B Series Whole Slow Juicer appeared, ​the technology was copied by lots of inferior Chinese ​juicers that ​yield less juice and dump more pulp into the juice – instead of down the pulp outlet where it should go. NUC (Kuvings) have now taken their whole slow juicer technology a step further and ​improved performance is available in their top of the range offering The Kuvings EVO820.

There are a few things to take into account before deciding if a large feed chute on a low speed juicer is potentially better, which we will go into in detail below.

(This article focuses specifically on slow juicer technology because with centrifugal juicers the question doesn’t arise. Providing you pick a good one – allowing for their inherent limitations on leafy greens and soft fruits – all high speed juicers work well with a large feed chute)

The Kuvings B​ Series (​below left) gives a good yield of juice, of about the same ​quality ​as first generation Korean slow juicers with small feed chutes, but ​offering the advantage of less ingredient preparation, This is because with the bigger feed you can drop handfuls of ingredients in at a time. The time taken to process the ingredients is also reduced slightly. 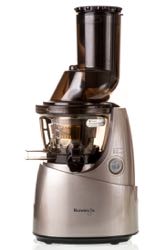 We’ve tested most of the brands of Chinese made whole slow juicers available in the UK, because the factories that make them have often offered us samples of their products with a view to getting them listed on our site. So far, we haven’t found one that meets the minimum performance level that we like to offer our customers, but the search goes on.

So that’s the first point. At the time of writing the large chute household models coming out of China offer significantly lower performance than those coming out of South Korea. If you’ve never had a juicer before and you buy ​a Chinese version, you might still be delighted with it and that’s fine. But we know that ​much better performance is ​possible, so at present we don’t offer Chinese slow juicers. Unfortunately we can’t name names due to legal considerations, but any large feed chute slow juicer currently available for under £300 would raise an eyebrow with us. Some brands have the audacity to charge even more for these under-performers, so it can be a case of ‘buyer beware’.

A recent step change in slow juicer performance was the advent of the ‘double bite’ or ‘twin wing’ juicing auger in second generation slow juicers like the Omega VSJ843, but these have a smaller feed chute. NUC have now responded with a better performing big chute juicer and that technology is ​also found in the Omega MMV702 (The same technology as the Kuvings C9500). Juice yield and pulp content from the latest generation of NUC factory juicers is comparable with our previous best model, the Omega VSJ843. Both machines give a juice that is so free from pulp that sieving it is unnecessary, and they perform better than any other slow juicers we’ve tested.

This second point relates to food preparation before juicing. If you juice a lot of apples then this is possibly a no-brainer. The whole apple feed chute juicer will win most of the time, ​as long as the apples are relatively small, and you don’t want to cut them open anyway to check the condition of the core before you juice them. With larger carrots there can be time saving on ingredient prep too, but it’s important to ​note one point in relation to peoples expectations. Even if you have got a large feed chute, the juicer still has to keep up with the rate at which you put the ingredients in, so the juicing process itself is not going to save you a huge amount of time, although it will be a bit quicker overall.

Due to safety considerations and in order to prevent accidents, the large chute on early NUC juicers has a divider at the bottom to prevent people sticking their hands in and juicing their fingers! This means that you will still have to push a whole apple past this obstruction, which also serves as a knife to divide the apple in two before it contacts the auger. Ingredients that will fit either side of the divider in the feed chute will still self-feed more or less, so it’s primarily when juicing whole apples that a push on the pusher will be needed. With the top of the range Kuvings EVO820 the extra large feed chute concept really comes into its own and with the ‘flip gate lid’ technology this premium model has almost totally eliminated the need for any food pusher, and there is no fin at the bottom of the chute to push past.

You will still need to chop long fibrous stalks like celery, kale stalks, pineapple, etc. to avoid the fibres bunching up and clogging the pulp outlet – this is true ​of almost any juicer except centrifugal models. Another no-no with bigger chutes is dropping a solid ‘bomb’ of whole beetroot in, because this will cause most models to activate their overload cutout. Even a few really chunky carrots can require use of the reverse function in a back and forth motion occasionally, so it’s ​usually still better to feed ​very fat carrots one at a time.

All things considered, there is certainly an advantage with some models to having that extra large chute when it comes to time spent actually making the juice.

The Dreaded Juicer Clean Up!

Finally we come to the one thing that almost everybody dislikes about juicing. Cleaning up! Once you get into a routine this is a small price to pay with most juicers, when you consider the huge health benefits of the raw nutrients in juice. But most of us still don’t like this part.

You may have seen whole slow juicers with very large feed chutes with a kind of flap arrangement ( below, right) on the top for feeding in whole apples. Cleaning inside the top parts of these juicers requires a little more effort to get into all the nooks and crannies, so you lose a little bit of the

time saved on ingredient preparation. There’s nothing in it when it comes to cleaning the various types of auger, so that’s not an issue between the different models.

Most slow juicers offer the advantage of a juice outlet ​seal, which allows you to fill the juicing parts with water after juicing. You then switch the machine on and its own wiper blades will help clear the pulp at the end of a session. Open the juice outlet again and you will already have washed away most of the leftover pulp inside the juicer.

Usually, cleaning the filter screen is the bit where we spend most time. The first generation of ​large feed chute slow juicers are comparable in ease of screen cleaning ​to the first generation small feed versions. But there is a difference when we come to the ​newer technology for both feed sizes.

The new models give a higher return on your ingredients – more juice, less waste – but the way they move the pulp through the juicer is impacted by the screen designs and the use of pressure in the juicer. When it comes to clean up time we see a difference that swings the choice back in favour of the Omega VSJ843 juicer, and we have yet to find a slow juicer with a filter screen that is easier to clean than this one. But let’s be clear, we are talking very minor differences on clean up time, maybe 30 seconds or so. 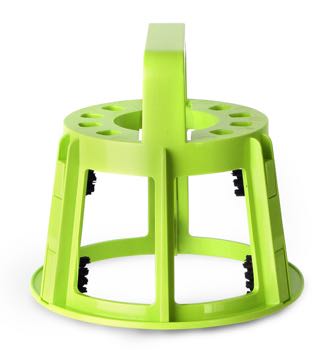 There is a useful tool included for getting the thick of the pulp off the outside of the whole screen with Kuvings models (see the green gadget pictured opposite) but a bit more attention to the finer holes maybe needed. You can make this a little easier by leaving the screen to soak either on the juicer (filled with water) with the juice flap closed, or in the sink.

With the screen of the Omega VSJ843, less effort is required at this stage of clean up and we have a theory about this. Around the inside of the row of very fine holes at the bottom of the screen on this machine, there are a series of narrow raised vertical ridges without any holes. We think that these vertical ridges cause the rotating auger to ‘roll’ the juice and pulp mixture past the filter holes, whereas without them there would be more of a ‘smearing’ action. The ‘rolling’ action tends to force less fibre into the filter holes in the first place, making clean up on the screen of the VSJ that little bit easier.

Personal preference will still be the main deciding factor for most of us. If you are looking at the large chute models currently coming out of China, then in our opinion you will be wasting significantly more of your ingredients and therefore in the longer term, wasting your money. Korean made masticating juicers are still the best the world has to offer. The Kuvings C9500, The Kuvings EVO820 and the Omega MMV700 will all give a significantly higher juice yield than earlier ​wide feed slow juicers and now for the first time we have three juicers that can compete on equal terms for performance with our previous ‘best ever’ hurom factory small feed juicer, the Omega VSJ843. All in all, these newer large feed slow juicers will also save you a little time, and they are deservedly becoming increasingly popular.

Nick Ledger, Owner and Director at UK Juicers, is 43 at the time of...