The Best Slow Juicers For 2023

As we approach 2023 there’s nothing more incoming on the radar from the top manufacturers, so this list of the best premium cold press slow juicers is unlikely to change but if it does, we’ll update the article and let you know. The last time we did a ‘best slow juicers’ piece we speculated that the design limitations of this juicer format might have been more or less reached. How wrong we were! Since then we have a couple of new juicers that have made major changes to the juicing experience, while keeping our must have feature of very high juice yields.

If you think this in depth look is going to induce some TL;DR here’s the list of our top 5 models (in no particular order) if you’d rather go straight to the product pages to check them out.

Before the ‘Slow Juicer’ term started to be used, the typology of fruit and vegetable juicers was blissfully simple. You could have a masticating juicer or a centrifugal juicer. That’s it. Then manufacturers wanted to further promote the benefits of the masticating juicer over the humble centrifugal by including selling points in the nomenclature. Low speed was considered an advantage so we saw the birth of the term ‘Slow Juicer’. Slow juicers already existed but the term was first applied to the newer vertical format low speed juicers that we are mainly discussing here.

Then came the distinction between 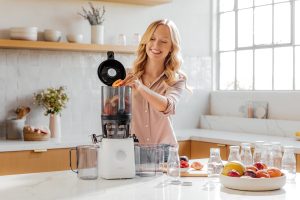 We are focused on vertical slow juicers here because when they appeared on the scene this format became a new outright favourite in the juicing world. That is partly because horizontal models generally take a bit more time to use, but there is one horizontal slow juicer example that should also get an honourable mention here – The Sana Supreme 727. This variable speed (still slow!) premium model gives truly exceptional juice yields.

The other slow juicer back story we need to mention is where they came from. They originated in South Korean factories and were quickly copied, as most things are, in China. South Korean models from the original NUC (Kuvings) and Hurom (Nama and Sana) factories are still the best available and that is all you see in our top 5 list. When western manufacturers offshore their production to China and oversee the process themselves the results are often indistinguishable but China’s own manufacturers are still catching up. They may seem to offer a price advantage, but that is lost through inefficiency and poor juice yields.

We are looking at a few main areas to arrive at what we think is an objective assessment of the best slow juicers currently available and they are as follows:

We’ve left out two other factors that some might think should be on the list and these are looks and reliability. How the juicer looks in your kitchen is going to be a very subjective choice so we leave that up to you. Reliability doesn’t need to be in there because all these models all come from the best two factories in the world.

Whether you pick Kuvings, Sana or Nama from the list, they all have exceptional juice yields in common. This means that over the years you will be extracting the best possible bang for your buck on ingredient costs. The payback on your investment through reduced ingredient waste over time with these juicers is undoubtedly worth the extra cost up front. There are a few lower price point models that have been around a bit longer that might contradict that thesis slightly and we’ll give them a nod later on. 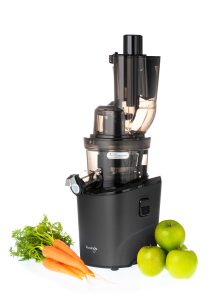 If you push us to pick an outright winner on juice yield, most of the differences found within our testing protocol could be ascribed to margin of error, with one possible exception. In our tests, The new Kuvings REVO830 (pictured right) nudges slightly ahead in juicing performance.

The top 5 slow juicer picks for 2023 all make it into the list because they don’t dump excessive amounts of pulp into the finished juice. What little pulp you do find is of a silky texture because the juicing process finely crushes and grinds ingredients, which leads to another key aspect of juice quality. The cold pressing action uses high pressure crushing and grinding forces between the juicing mechanism, or auger, and the filter screen. This thorough processing leads to better nutrient extraction, also giving a richer more flavourful juice with deep vibrant colours. Cold pressing also reduces oxidation and gives a juice with a longer shelf life.

If you take a few minutes to familiarise first, all these slow juicers are easy to use straight out of the box. Once you’ve juiced with them a couple of times it quickly becomes second nature to whip up a batch of juice. There are no stand out differences in the number of parts to assemble, or how they go together. All of them have a safety interlock feature which means you won’t be able to switch them on if you assemble them incorrectly. This prevents damage to the machine as well as making them safe for children to use.

This is a task that most of us gain minimal satisfaction from. As other more famous juicing experts than us have already noted, there’s not a great deal of difference in the models in our list in cleanup time.

All have juice taps on the drum. As well as preventing drips, if you close this tap after juicing and pour water in to the chamber, you can turn the juicer on and swish this water around inside to do a helpful pre-wash. They’ve all given 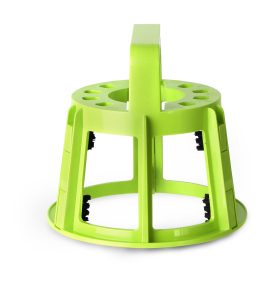 thought to accessing nooks and crannies with bigger pulp outlets and they all include useful cleaning brushes. The hardest part in most juicer clean up is the juice filter or screen which requires a bit of scrubbing. There’s a slight difference here with all Kuvings juicers because they’ve designed a great wrap around screen brush that gets the majority of fibres out of the filter while rinsing it under the tap saving a bit of time (see pic).

The rate at which the juicers can process ingredients is pretty similar for most of them, so when looking for time savings there is one other main area – ingredient prep.

This varies between models but it also depends on your preferred juicing style. For the juicers that you have to feed ingredients in yourself (all but the Nama J2), you can still save a bit of time by prepping ingredients as you go along during juicing. You can chop a carrot or two while the last handful is still going through the juicer for example, reducing overall time slightly. The Nama Vitality and the Sana EUJ-828 will require the most chopping board action before you start, but if you are a wizard in the kitchen you can probably chop up a kilo or two of ingredients very quickly anyway.

There are a few time savers in the list that stand out for ingredient prep.

First is The Nama J2. One of our two 2023 ‘Game Changers’. This is known as a ‘hands free’ juicer because you can load up the big hopper on the top, switch it on, and it does the juicing without the need for feeding ingredients in yourself. You can be doing something else while it juices, 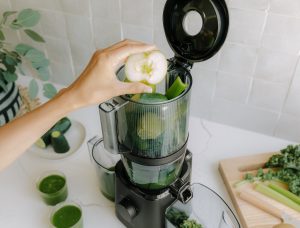 maybe load the dishwasher, put the bins out, or chat to a friend. We have noticed however that the actual juicing process time with this self feeding juicer can be a bit longer than the rest in the list, but a big part of the appeal is that you are free to use that time to get on with doing something else. The J2 doesn’t completely eliminate ingredient prep before you load the hopper but there is much less of it to do than with the small feed chute juicers.

The stand out time saver on ingredient chopping is the Kuvings REVO830. (Kuvings only make large feed chute slow juicers, so the EVO820 also requires less prep than the other brands). The REVO830 introduces a REVOlutionary change (groan) by eliminating almost all ingredient preparation. Kuvings have remodelled the juicing auger to add an auto-cutting feature at the top. They’ve also added an extra feed chute for long ingredients like carrots and celery. This means you can drop whole carrots and celery stalks into the juicer and

it will chop them for you on the way to their doom in the crushing surfaces below.

The flip gate lid feed chute has also been widened to 88mm – the biggest yet – so even larger apples can be juiced whole. If you don’t like chopping fruit and veg, the REVO will do it for you at 60 chops per minute (with each revolution of the auger) and it is without doubt the best in class for minimising prep time.

So there you have it. Swings and roundabouts. A lot is down to personal preference and you can’t go wrong with any of the models in our list. At the risk of being called fence-sitters, we can’t name an outright winner. The Nama J2 definitely offers something new that will appeal to many people – the notion of hands free juicing. The Kuvings REVO830 is another candidate for outright winner as it almost totally eliminates the need for chopping ingredients and just pips the others for overall juice yield. It’s also the best juicer we’ve tested for carrots and celery, for ease of use as well as performance.

The small feed chute juicers should also be up for consideration, as they give excellent results at a lower price point and all you have to do is sacrifice a couple more minutes to get the juicing done. The Nama Vitality and Sana EUJ-828 are both using Hurom Alpha technology and therefore give similarly excelent results. These models outperform earlier small feed models with a slightly higher juice yield and reduced pulp content in the juice. But if price is a limiting factor, we should also give a mention to the Omega VSJ843 and the Sana EUJ-808. They have been around a few years now, but their performance for juice yield and quality is still right up there, making them worth adding to your research list.

Which is Healthiest? We often get customers contacting us because they...

What’s The Best Juicer For Celery?

This article was updated in September 2022 to mark the arrival of...

If you’ve heard of the Norwalk Juicer, you are either already very...