We are very confident that we have two of the best slow juicers in our range that are hard to beat for performance by any other low speed, cold press juicers on the market. For anyone who is serious about getting the maximum return on investment from their juicing ingredients, there is no need to look any further than either the Omega VSJ843 or the Omega MMV700. The price paid for either of these superb machines will repay itself several times over, by significantly reducing waste every single time you juice.

We test juicers. We don’t spread marketing hype. So when we say the words “Best Slow Juicers In The World” we are ready to put our money where our mouth is and challenge anyone to prove us wrong. We’ll happily admit it if we do find a better performer. How come we’re so confident? Because we test and test again, comparing the juicers that we offer with all the major contenders out there. We even test against many of the cheap (and not so cheap) Chinese made versions that spring up with increasing regularity. We’re confident when we say that at the time of writing (May 2017) you will not find a vertical slow juicer anywhere that will give a higher yield of juice than these top of the range models from Omega.

How We Do Our Tests

There is no guesswork when we do our juice yield tests. There is a lot of nonsense out there trying to persuade consumers to buy a particular juicer and as a result juicer testing can sometimes seem a little far-fetched. We don’t produce carefully edited videos for youtube that create a misleading impression. We don’t make subjective claims that we can’t support. We promise to tell you the truth. We are always looking for the best juicers to include in our range because we’re passionate about getting the best from juicing ourselves. If we do find a better performer than these two, we’ll want to be offering that to our customers too.

We weigh all our juicing ingredients with an accuracy to a single gram when we are testing. We test using large batches of a variety of different ingredients. We make sure that when we do a comparison test we have a uniform batch of produce for all the machines on test, so that each machine is dealing with the same quality of ingredients. We repeat the tests to get an average result. We only test for juice yield with sieved juice and this is an important point. Some juicer brands are claiming to give you more juice when really they are only giving you more pulp in the juice. We’re interested in the liquid juice yield because a good juicer is supposed to separate out as much of the pulp solids as possible. If a juicer is dumping a lot of pulp into the drink instead of through the pulp outlet it may look like you are getting more juice, until you pass it through a sieve and find that handfuls of pulp have been giving a false reading on the measuring jug.

Why Are These Omega Juicers More Efficient?

Since masticating juicers were first invented, South Korean manufacturers have led the way in juicer technology. They invented what we now commonly refer to as ‘Slow Juicers’ and the term is usually used to describe the upright cold pressing action single auger models like the two we feature here. As is often the case, Chinese manufacturers have copied the slow juicer technology developed in Korea but in our opinion they haven’t yet come close to the Korean made models in terms of juicing efficiency.

The Omega VSJ843 and the MMV700 come from two of the most reputable juicer manufacturers in the world. The VSJ employs the second generation technology from Hurom, with a ‘double bite’ or ‘twin wing’ juicing auger. 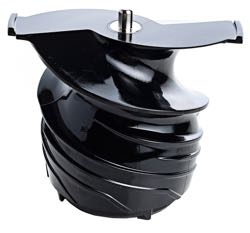 The MMV uses the latest large feed chute ‘whole slow juicer’ technology from NUC, who also manufacture the Kuvings models. In terms of the upright slow juicer format, we can say with confidence that there are currently no other factories that produce slow juicers that give more juice with less waste than these two. 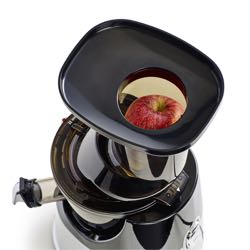 How Can They Both Be The Best?

Surely one must perform better than the other? Nope. In our side by side tests with precisely weighed ingredients there was less than 2% variation either way in results between the two models and no clear winner. This is not so surprising when you consider that they come from the two leading global slow juicer factories, and these latest generation models also outperform earlier versions by a margin that justifies the heftier price ticket.

How To Choose Between Them

These are machines are aimed at serious health enthusiasts who are looking to save money on ingredients in the long term, while enjoying the superb nutritional qualities of cold pressed juice. There’s very little to choose between them, but there are a few minor differences that might swing it one way or the other for the individual.

If you want your juicer to do other things than juice, the fully accessorised version of the Omega MMV comes with one of the better homogenising attachments we have seen. This enables you to make nut butters, frozen fruit sorbets, baby foods, purees and salsas. Frozen fruit sorbets and ice creams are a deliciously healthy dessert and if you’ve ever tried Strawberry and Banana ice cream – made simply by homogenising frozen ripe fruit – we’re sure you’ll agree.

The large feed chute on the Omega MMV will also be seen as a plus for some people because it cuts down on the total time spent chopping ingredients, but it’s still going to be necessary to chop produce with long stringy fibres, which can otherwise cause some clogging in any slow juicer (celery and kale for example). There’s no doubt though that juicing gets a bit quicker when you can chuck whole carrots and apples in without prep.

.”..if previous machines have let you down, producing masses of soggy pulp and barely a splash of juice, the MMV is sure to restore your faith. The ultimate in no-compromise juicing; this investment piece is worthy of its price tag.” – Trusted Reviews

The smaller feed chute on the Omega VSJ can actually be an advantage if you juice a lot of leafy green ingredients as these will often “self-feed” without the use of the pusher. When feeding softer leaves like young spinach it’s actually easier to get such ingredients into the path of the parts that press them, because of the smaller chute and the flat cutting action of the twin wing auger at the bottom of the feed in the VSJ. So for someone looking to juice a lot of greens, we’d say this one has the advantage. Another area where the VSJ has a small advantage is when it comes to clean up time, because the filter screen requires a bit less scrubbing with the cleaning brush.

Add Up The Savings

When you look at the performance of these juicers in comparison to older technology, it’s easy to see where the savings kick in for someone who juices regularly. The payback time will vary according to how often you juice and what slow juicers you are comparing with. These two require an initial outlay of almost double the price of some of the alternatives that you’ll see on google shopping and on Amazon. If you compare to some of the cheaper abominations out there, then you could even be paying a premium of three times the price, and that would require proper justification for most people. So how can it be worth the initial outlay?

Lets take a hypothetical example of a person who juices about 5 litres per week with a mixture of ingredients. This is not what we would consider a hardcore juicing habit and if you are juicing for a couple or for a family this volume is easily exceeded. Depending on ingredients, you could be looking at somewhere around a typical cost of £3 per litre for a mixed juice including greens, or significantly more if you juice organic. The technology in these two Omega models offers a minimum of 10% better performance than comparable earlier models, and significantly more than that when compared to Chinese versions. Sometimes as much as 25% more juice, after you sieve out the pulp. 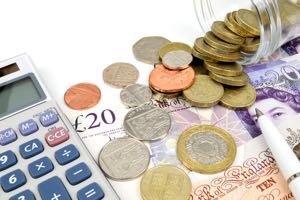 So taking our example of modest regular juicing, you are saving at least £1.50 per week on ingredients compared to other slow juicers. For someone looking to max out the health benefits of juicing for a family, a saving of £3 per week is still a pretty conservative estimate. In these two scenarios you are looking at minimum savings of £78 – £150 per year on ingredients. If we look at the performance of some of the Chinese slow juicers (some of which still carry a price tag of over £200), then the savings on ingredients rocket up to a minimum £195 per year for the single person or a whopping £390 for a family. So the investment quickly pays for itself and if you add to this the fact that Omega Juicers will long outlive many of the inferior models available, the case for choosing the best first time becomes a no-brainer.

If you are not sure juicing is going to be part of your routine in the future and you just want to try it out, then maybe a cheap juicer could be a good starting point. But if like us you are already convinced by the wonderful health benefits of owning a high quality juicer, we think these two top performers from Omega are a great investment, saving you money in the long run, and giving hassle free access to fresh, highly nutritious cold pressed juice at home.

EDIT: While these two excellent machines are still hard to beat for outright performance, there are a few new choices that stand side by side with them. ​Read ​all about the latest evolutions of slow juicer technology in The Best Slow Juicers In The World – Part 2

Which is Healthiest? We often get customers contacting us because they...

The Best Slow Juicers For 2023

Introduction As we approach 2023 there’s nothing more incoming on the...